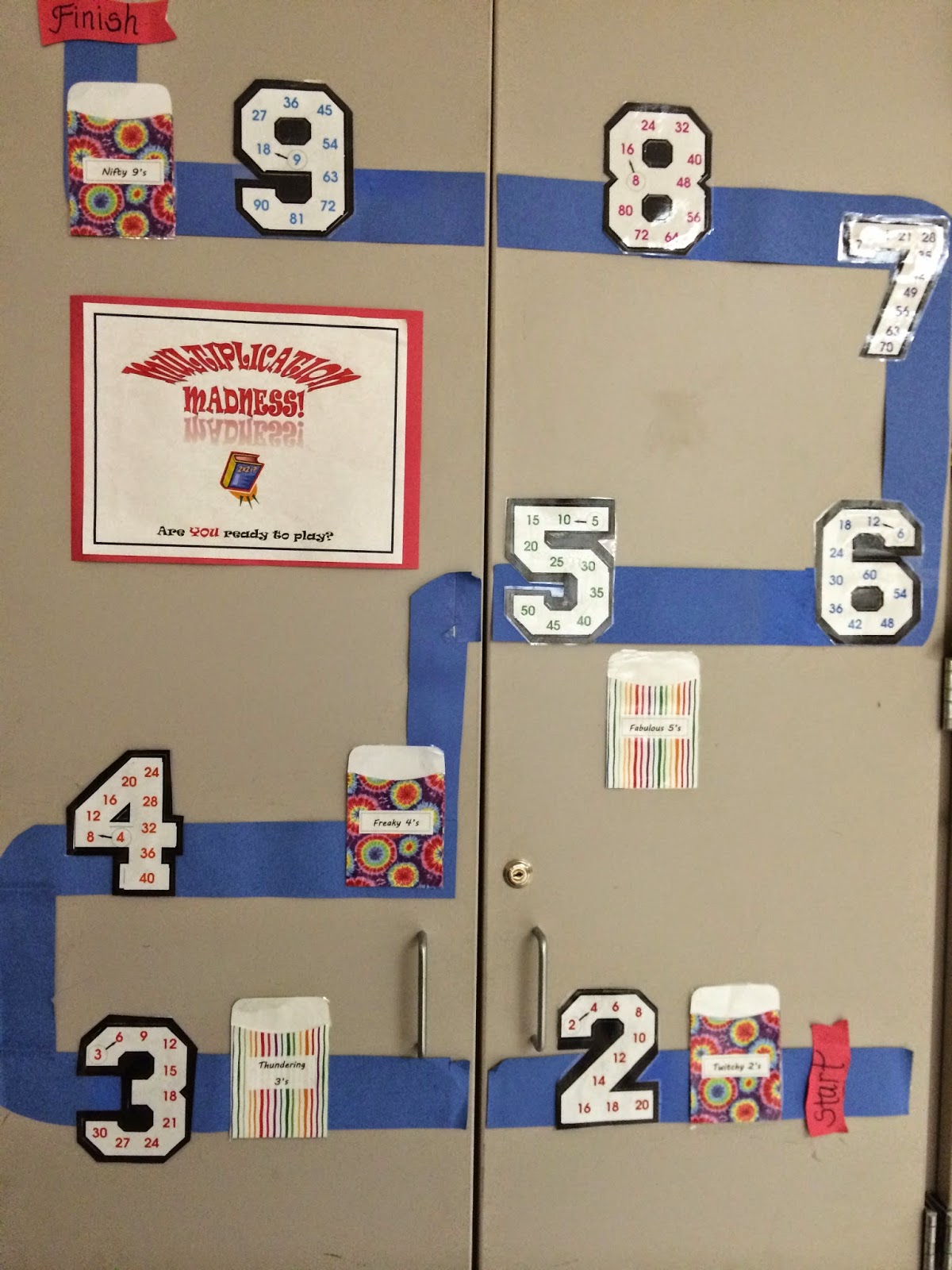 I found these free Multiplication Multiples on Judy Hopf's Teacher Pay Teacher Store. I knew I wanted to use them in my class but wasn't sure exactly how.  Then it hit me!

I inherited a Multiplication Race Track display when I moved to my new room this year. I loved it and didn't want to take it down.  So I paired the two together for a perfect math center. I added the Multiplication Multiples to the track and the kids now have a great way to practice their facts.  Here's how.

Have you ever used number ladders for students to learn their facts?   The students bounce a tennis ball as they say the multiples for the digit they are working on.  Brain research says that the bouncing and repetition of the multiples makes the learning stick for the kids.

They also build arrays, use Cuisenaire rods and lots of other multiplication partner games from K-5 Math Teaching Resources to help them learn their facts. Then it's time to assess.

I must say up front that I am not a fan of timed tests. OK, I feel better now.  Having said that, each child takes a test for whichever number they are working on.  We call them "Scoops Test".  I got the "Scoops Test" idea from Laura Candler many, many years ago when I taught fourth grade.  I tried to find a link on her website, and on her TPT store, but I couldn't find it.  I was able to find a link to her multiplication and division sample pack. She has changed it a bit since I used first used it.

Here's what we do.  To get ready for their test, each student writes the number they are working on 10 times down their paper. 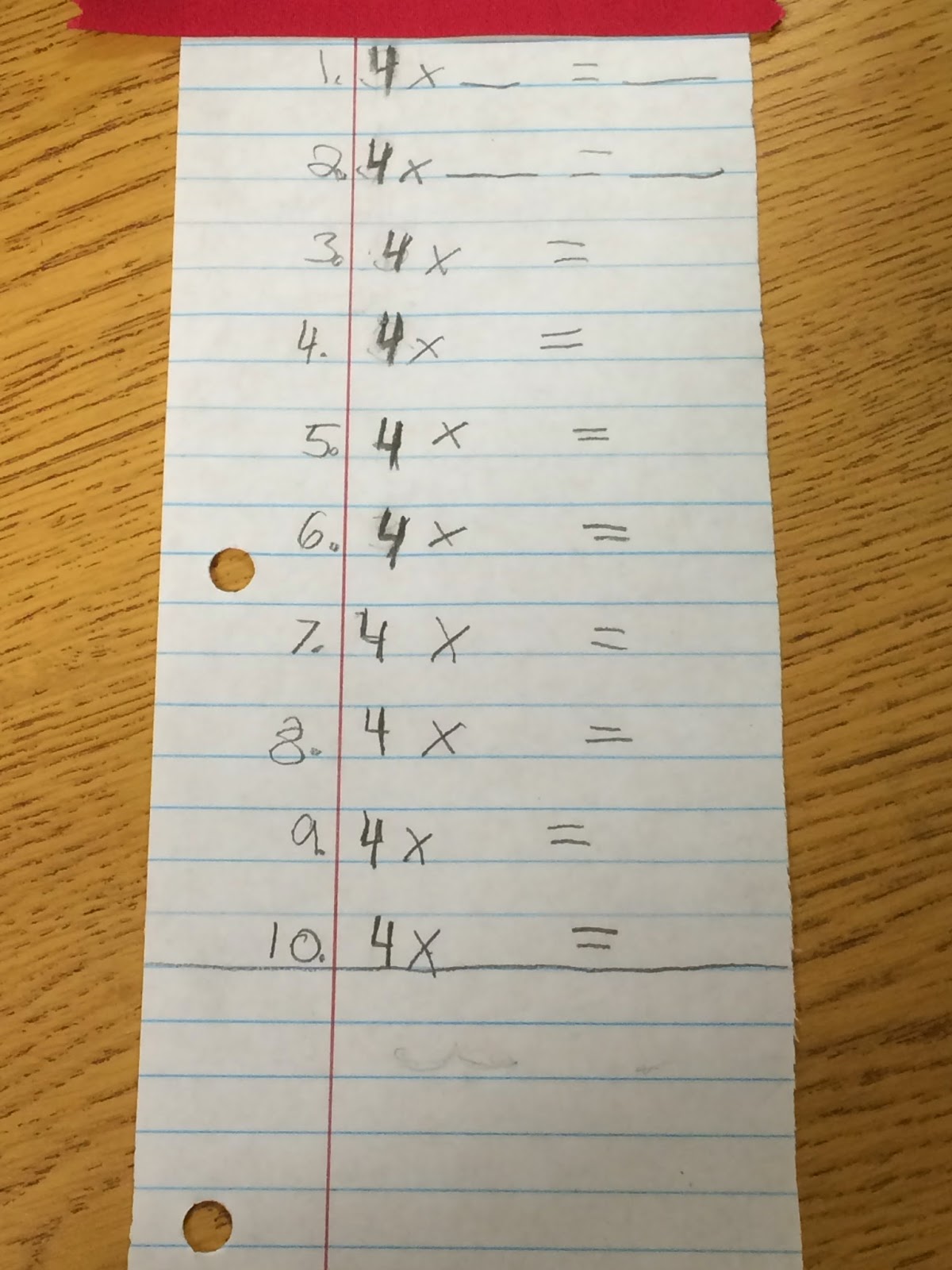 Once everyone has their paper ready, I call out numbers 0-10 (in random order) and they add the second factor to their paper.  To make sure we all start at the same time I say a little chant that goes like this:  "Raise your pencils in the air, and wave 'em like you just don't care.  If you're ready to take this scoops test, somebody say Oh Yea!" and the kids respond loudly, "Oh Yea"!  They have 1 minute to write their answers. 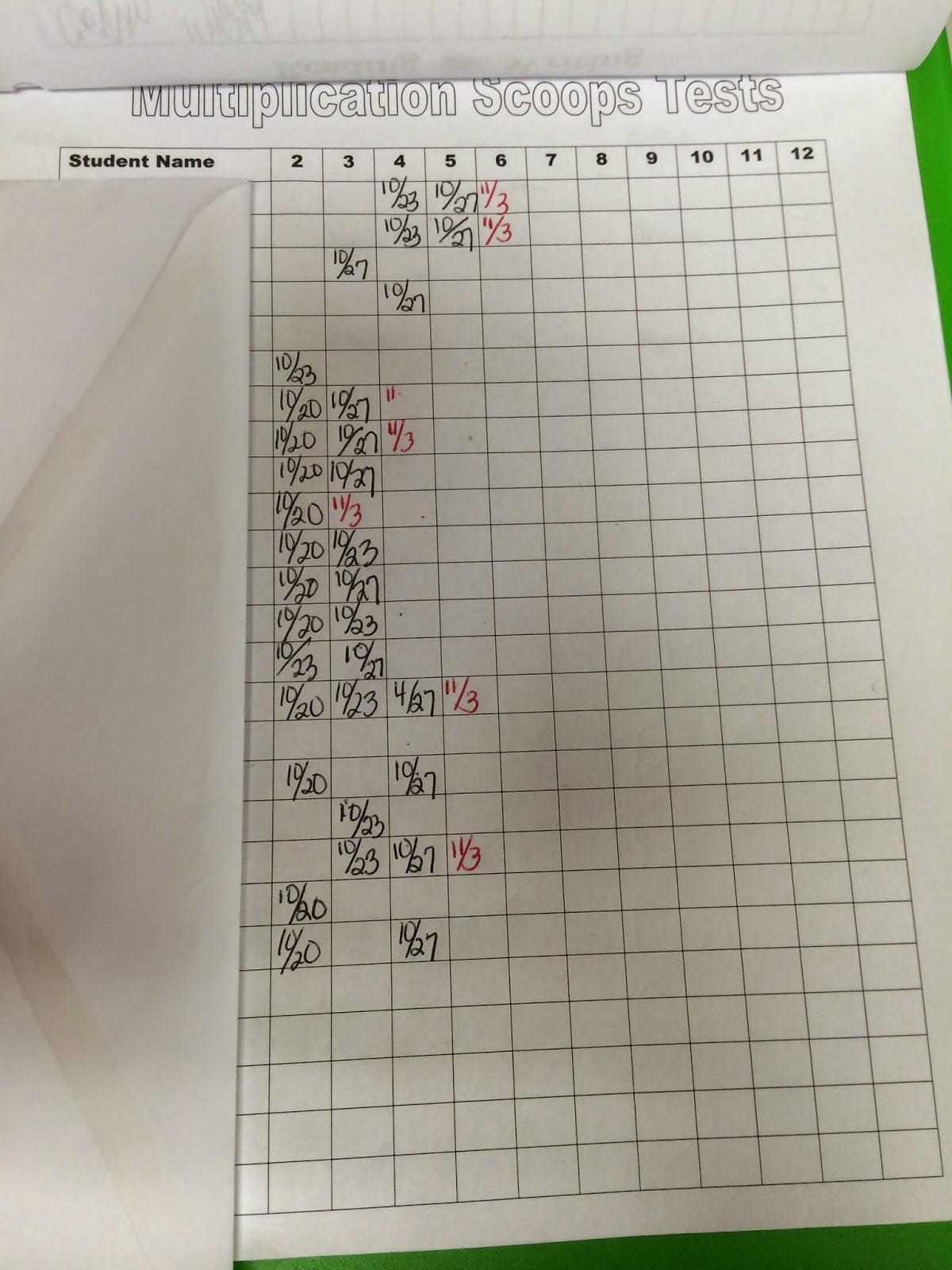 Once they have passed their test (with 100%), I make a note of the date on my recording form.  That way I can check-in with any students who get stuck for too long. 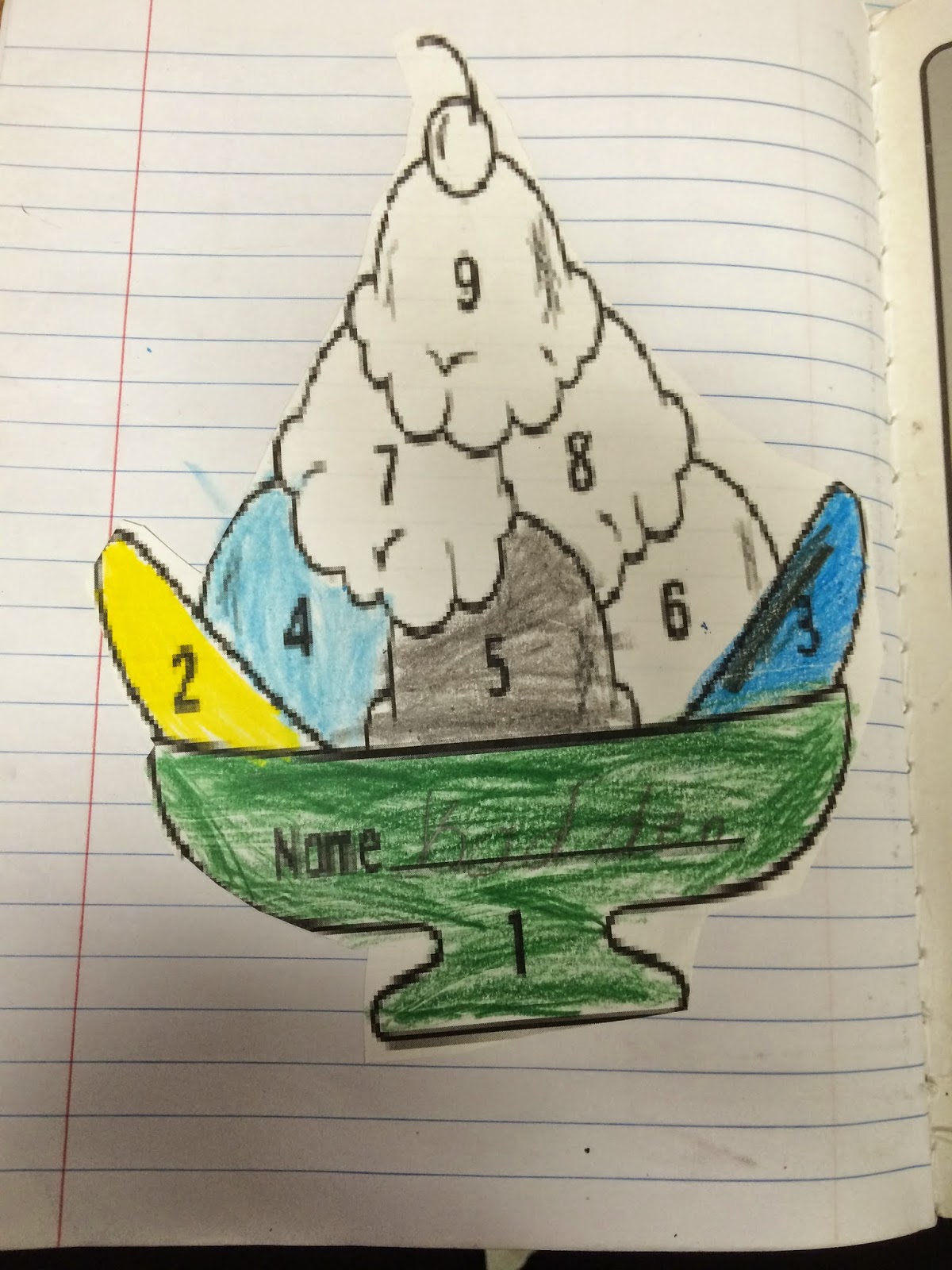 They color in the next "scoop" (get it:-))  on their recording sheet and move their popsicle sticks to the next number on the board. When I originally used this idea, each student had a cone on a bulletin board, and they added scoops to their cone as they passed their test.  You can get the student recording sheet and scoops from Digital Classroom Clipart's TPT store. 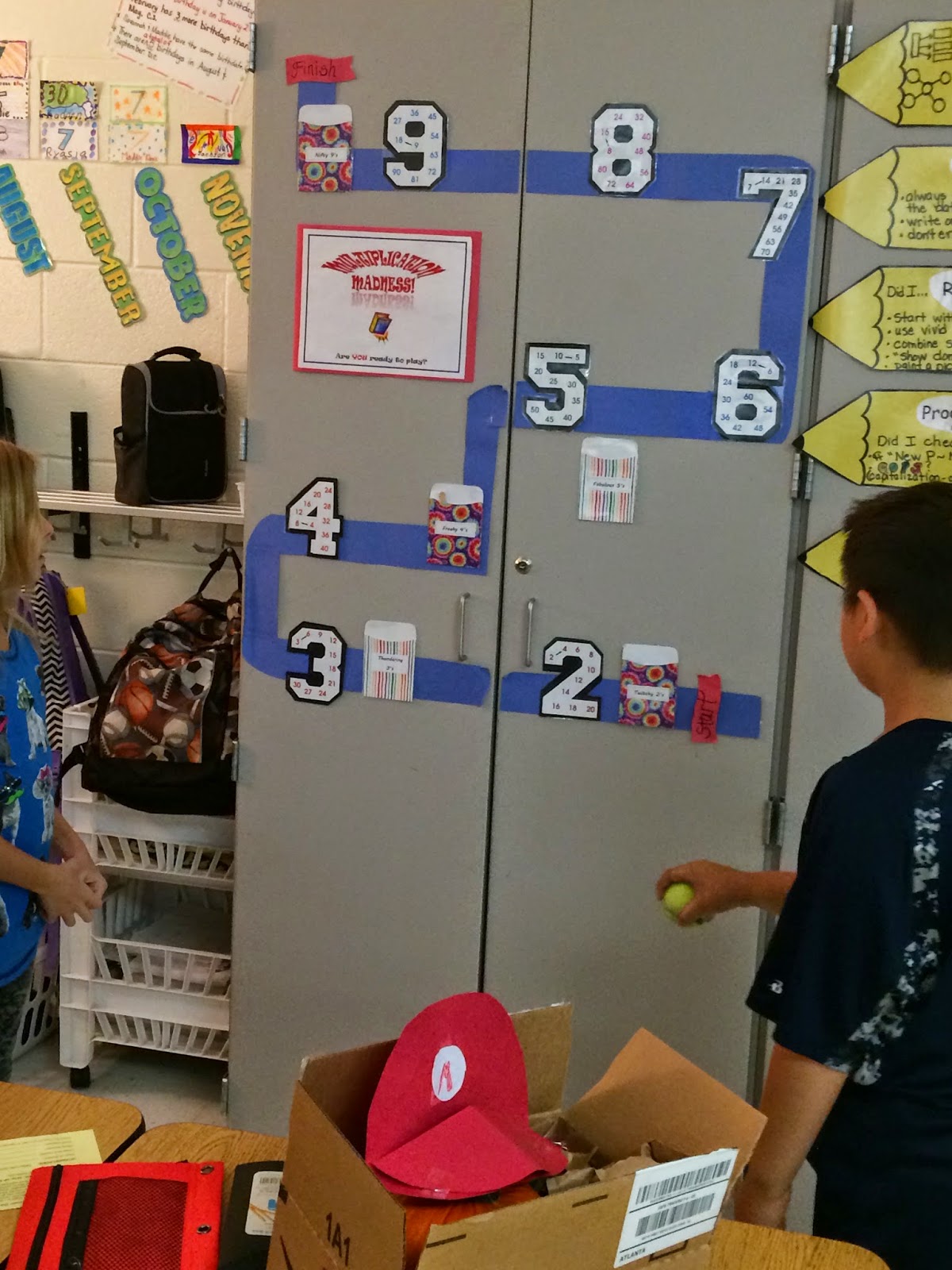 Now they are ready to practice the multiples for their next number.   Each student keeps their recording sheet glued on the last page of their math journal.  When the class learns their facts we will have an ice-cream party to celebrate! 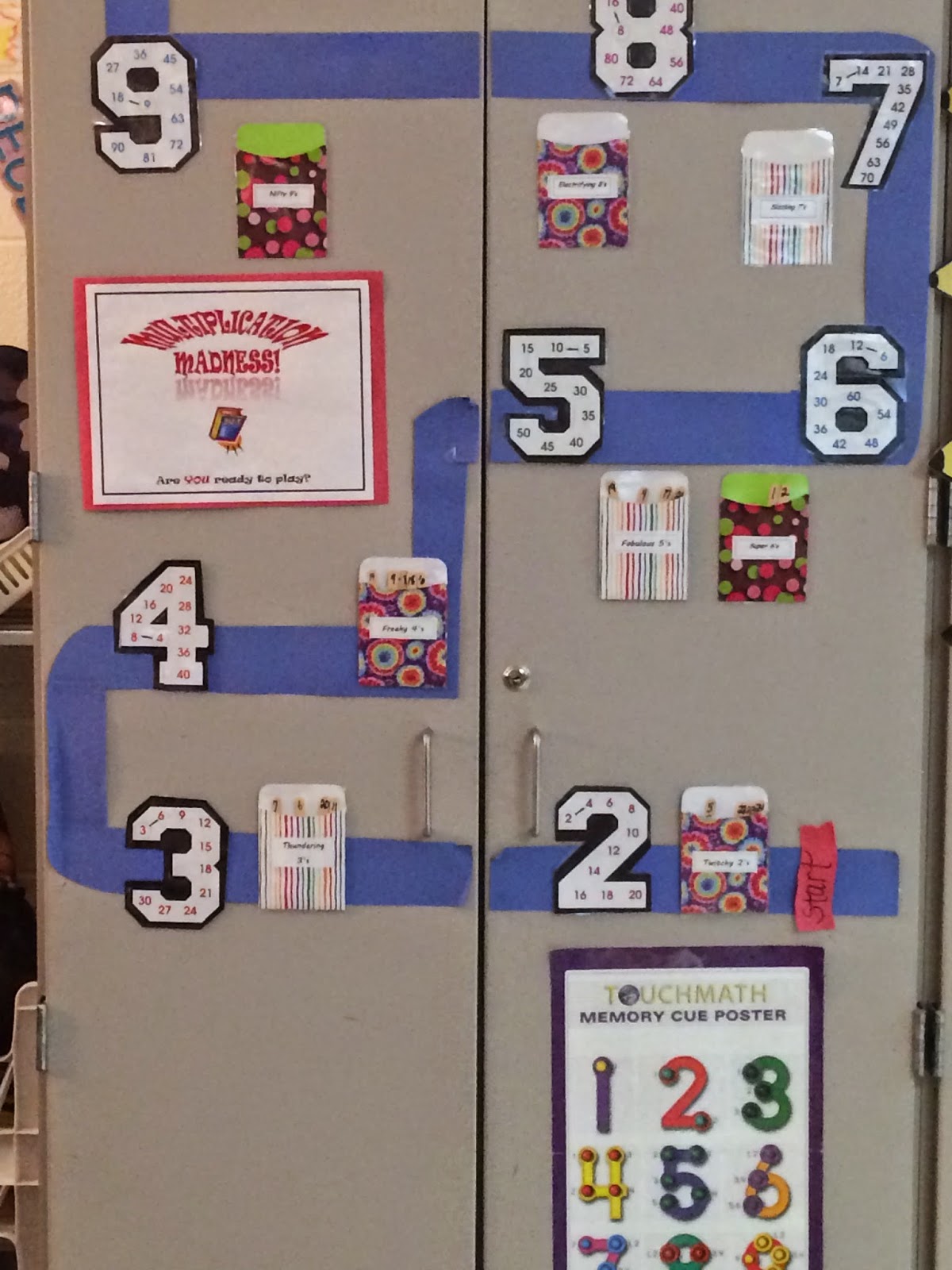 I wasn't going to put the sticks in the pockets, but they wanted to.  The sticks have their student number written on them. I also added the Touch Math Memory Cue Poster so my students can make the connection when they are multiplying.  It has become a popular center in my room.  What do you do to help your students learn their facts?
at November 09, 2014 No comments:

Our Class is reading The Miraculous Journey of Edward Tulane as part of The Global Read Aloud. You can read about the GRA here.  So what does Edward Tulane, scary funny creatures, and descriptive writing have in common?  I'm glad you asked.

First, let me back up a bit.  Each week we read a different poem to practice fluency and look at elements of grammar.  This week Jack Prelutsky's, The Creature in the Classroom, was our poem of the week.  We noticed the different synonyms he used for the verb "ate" and we also talked about adverbs.  The poem describes all the different things the creature ate, but it never tells you what the creature looks like, so we made our own. 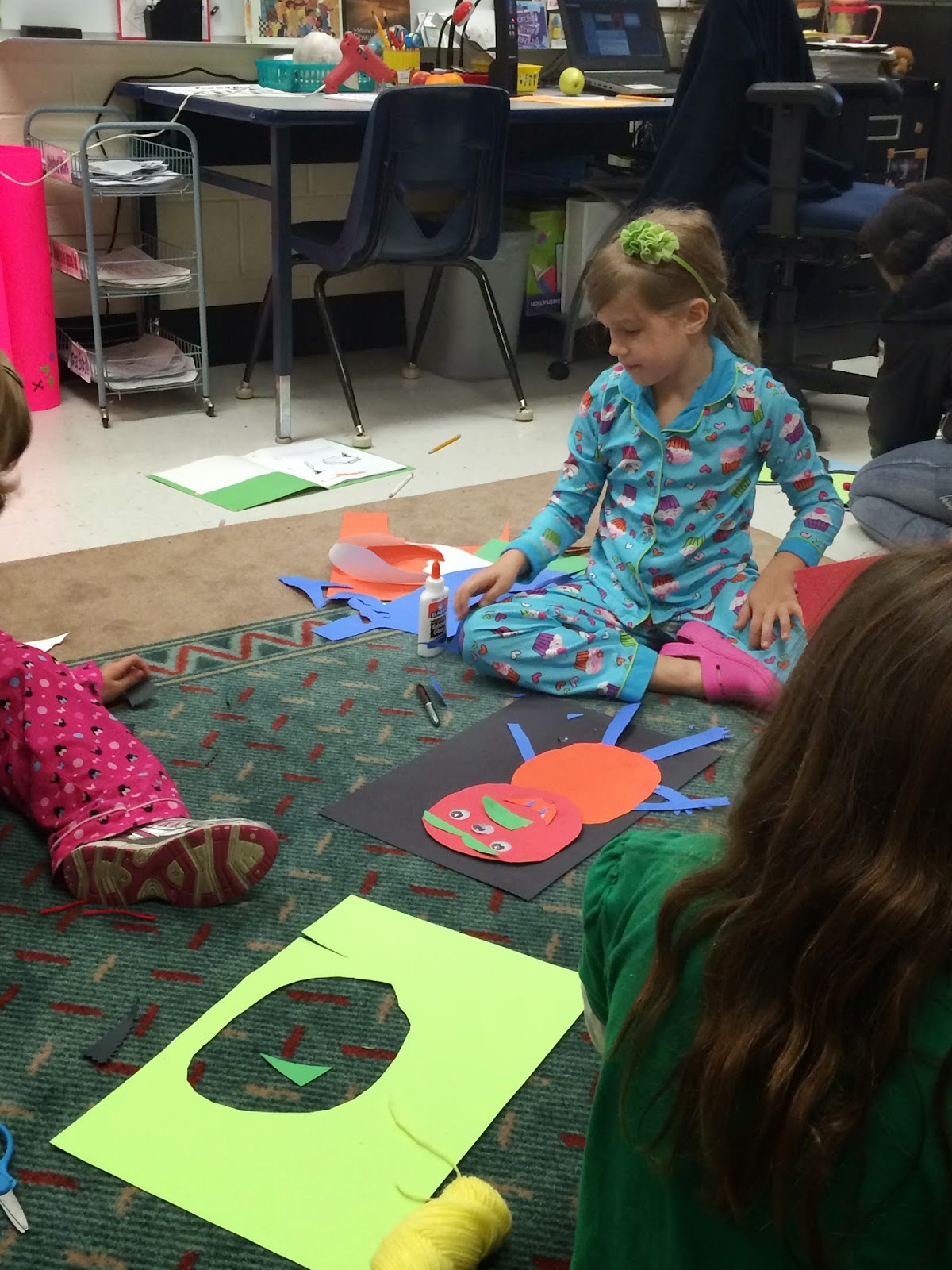 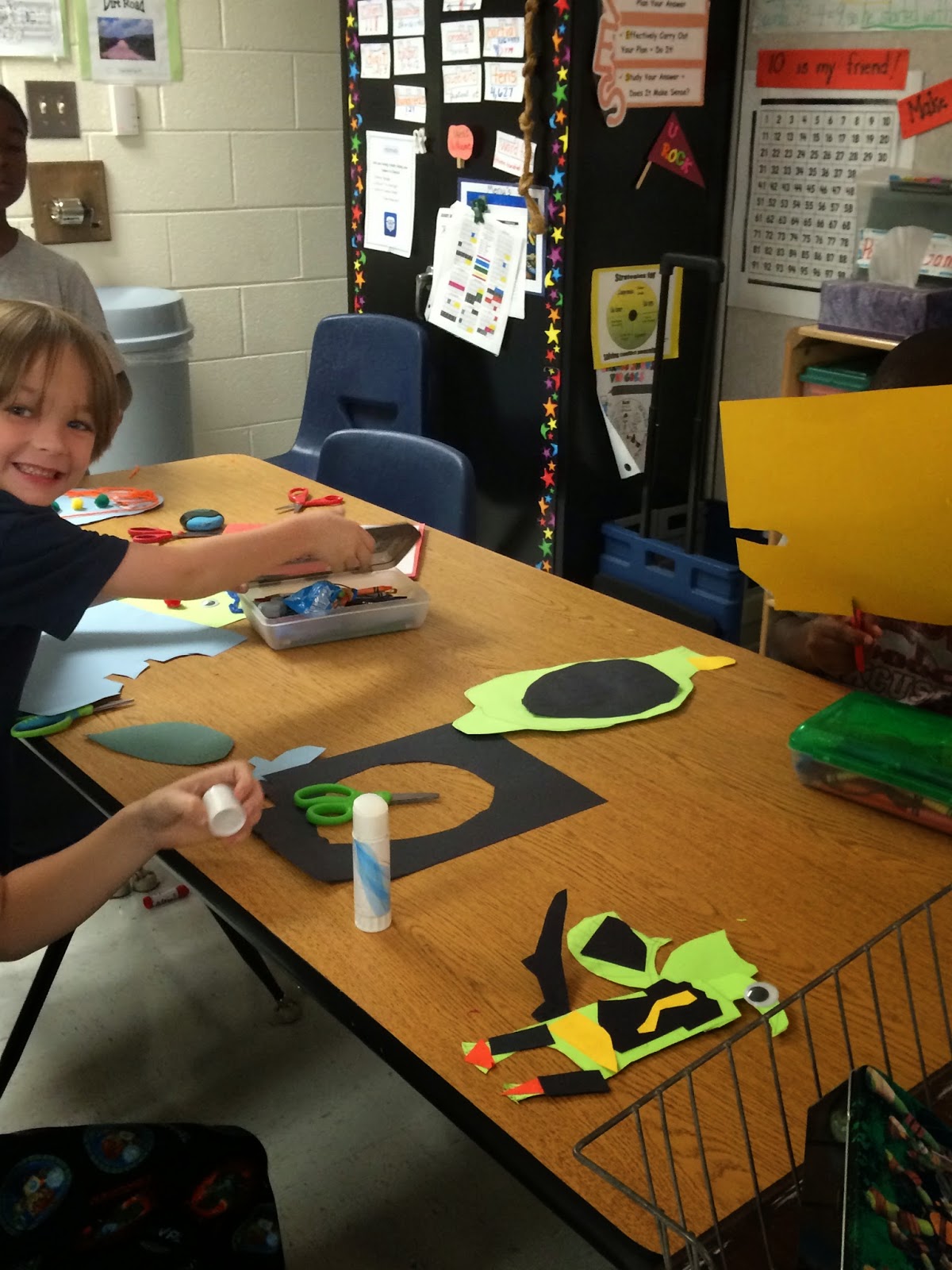 They could use anything they wanted to create their creatures.
Anything EXCEPT markers, crayons, or colored pencils! 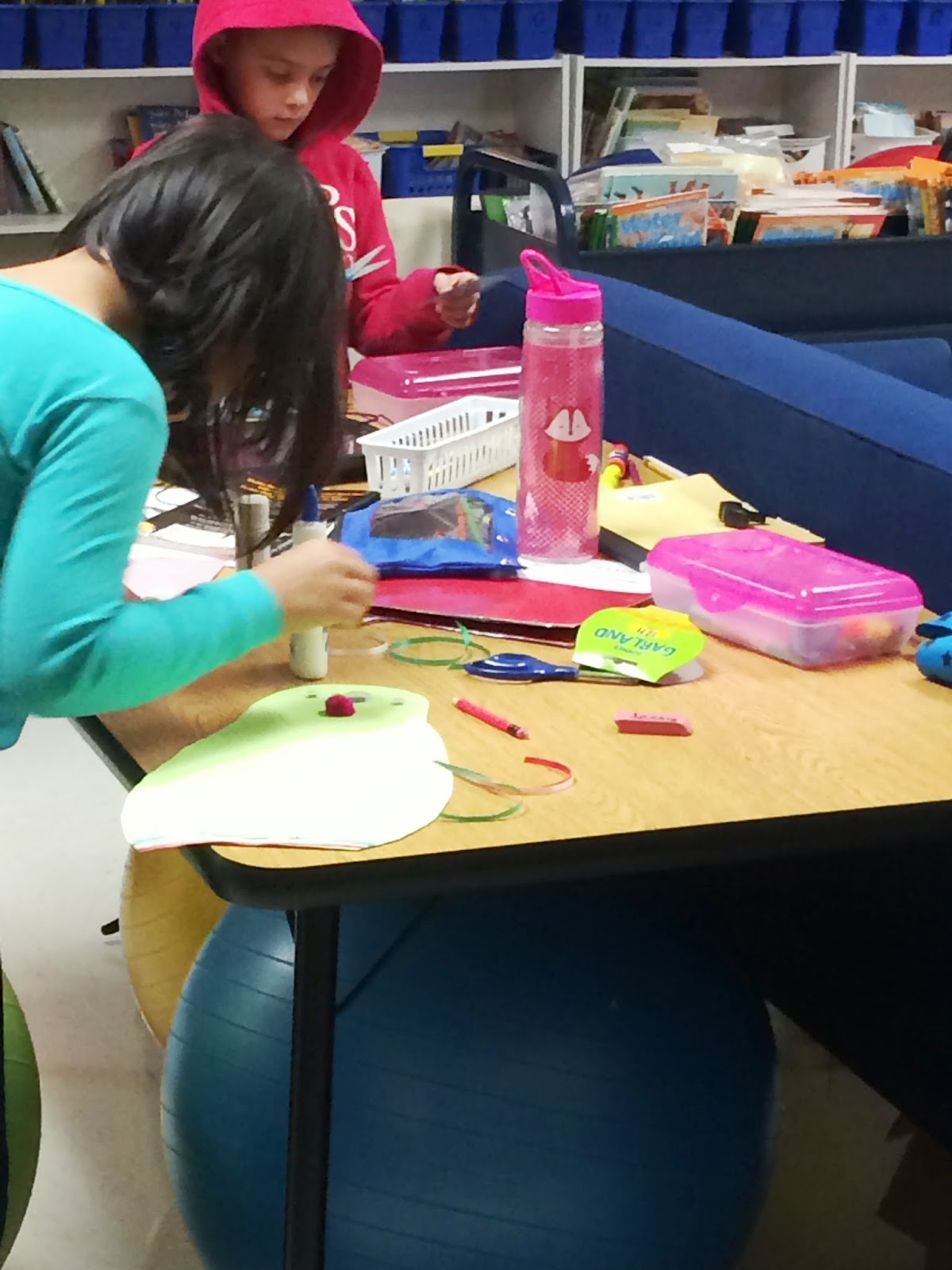 Well, we couldn't just create creatures, even if it was Halloween and Pajama Day all rolled into one!  So I decided to have the students write narratives about their creatures.  I wanted them to focus on introducing the setting and their characters in the beginning of their stories. We took a look at how published authors introduce their characters, since we are all authors, by the way.

And guess which book we used?  You got it.  Kate DiCamillo does a terrific job of introducing the setting and describing Edward Tulane in the first 2 pages of her book.  In case you've forgotten here is her opening sentence:  "ONCE, IN A HOUSE ON EGYPT STREET, there lived a rabbit who was made almost entirely of china."  She then goes on to describe Edward in great detail.  I reread those pages to the students and then we quickly brainstormed different settings for their creature stories:  "Once, under a bed in an old wooden mansion . . . Once, in an underground tunnel in China . . . Once, in a classroom at Cheatham Hill lived a creature. " You get the picture. 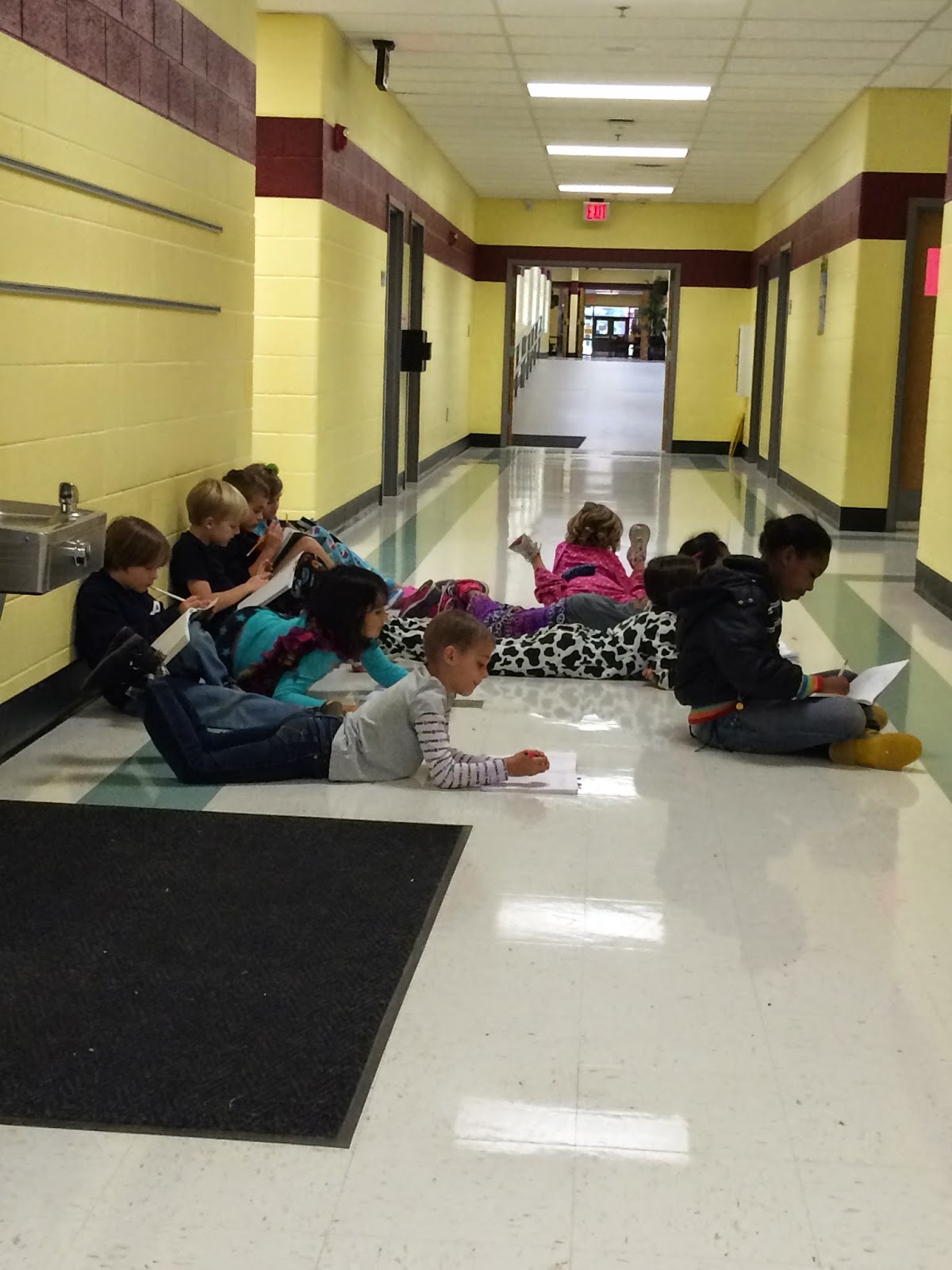 Next, we went out in the hall so they could get a better look at their creatures
as they wrote their descriptive paragraphs. 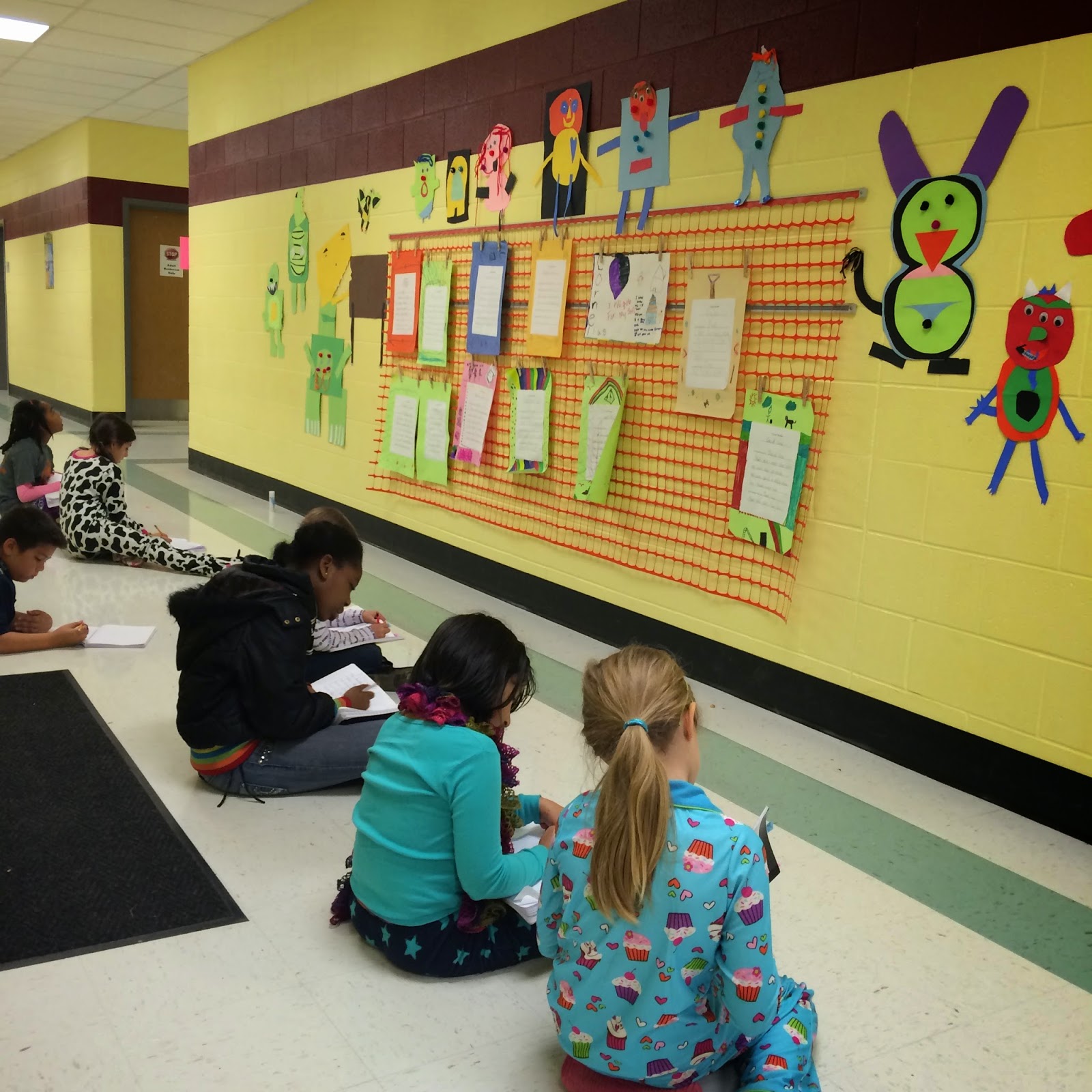 Then they shared their introductory paragraphs as the rest of the class checked to
make sure they had done a good job with their descriptions. 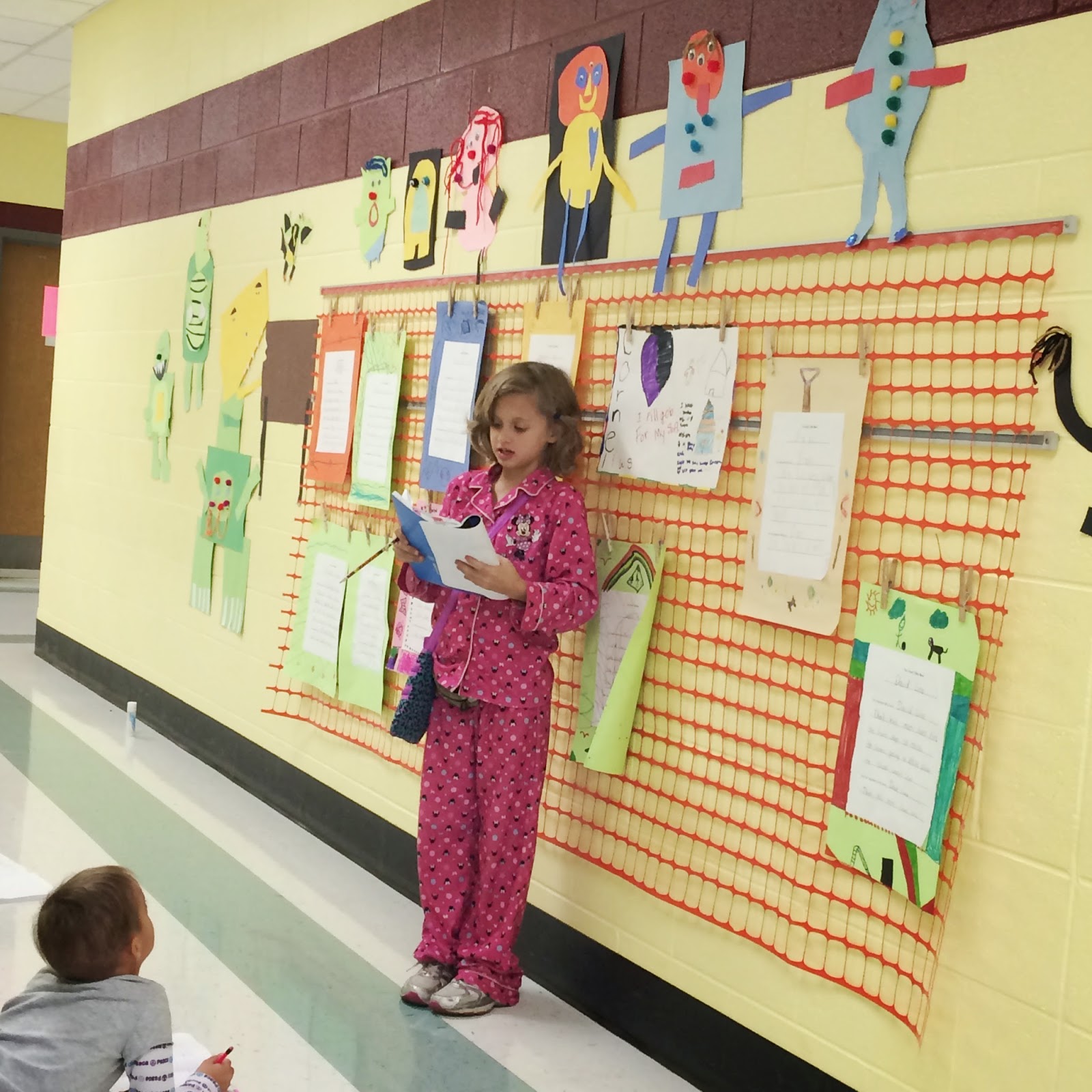 Now that their introductory paragraphs are complete, they are ready to work on the rest of their story. I believe it's time to introduce my third graders to Google Docs.
at November 01, 2014 No comments: