If you're like most teachers, the summer is not only a time for lying on a beach somewhere soaking up the rays, but it is also the perfect time to perfect your craft. There are so many wonderful conferences going on right now . . . International Society for Technology in Education (ISTE), Model Schools Conference (MSC), and Teachers College Reading Writing Project (TCRWP) just to name a few. I was fortunate to attend ISTE2014 when it was held in GA a few years ago but as much as I would have liked to attend this year, it was not in the budget! Who am I kidding? I don’t have a budget!

I still want to learn new things and be a part of the excitement. So what's a teacher to do? The next best thing is to experience these conferences virtually. I can be a part of the action through Twitter. Yes, Twitter!  Participants at the conferences are happy to share what they are leaning.

How can I do that? Glad you asked. Just put the hashtag (#) in front of the conference name you want to visit and you will be connected to some awesome educators who are willing to share what they are experiencing. By visiting #MSC18, #ISTE18, or #TCRWP, you will be able to get a snapshot of some golden nuggets left by others. 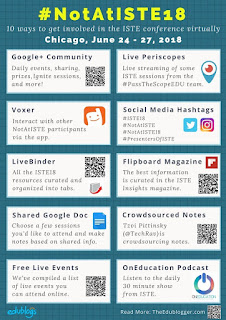 Check this out. There is even a dedicated hashtag for people who can not attend ISTE. Enter #NotatISTE18 and it's like you are there. Thanks to @heyMattFrat and @mbfxc I was even able to see the FlipGrid Poster sessions and view many of
the inspiring Ignite Sessions at ISTE. Thanks!!

I have to give a "shout out" to my sister, @keashr. She used Twitter to magically transport me to the TCRWP Summer Institute. She is relatively new to Twitter, so I had to convince her to tweet out some pics and words of wisdom from the presenters. I'm trying to get her Twitter game up! 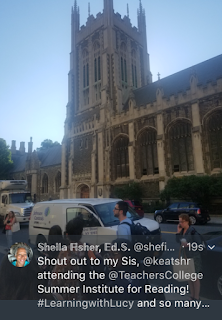 So even if you're lying on a beach somewhere (like I wish I was right now), you can still experience these wonderful conferences through Twitter. As Mavis Staples once sang, "Let me take you there".

February 16 was Digital Learning Day! It just so happened to fall right after Valentine's Day. So we couldn't pass up this opportunity to share the love with other staff at our school. The students created Virtual Valentines.  We used DoInk Green Screen App to capture our video messages and of course, Seesaw to share them. Seesaw makes it so easy to create QR Codes to share your work with others. 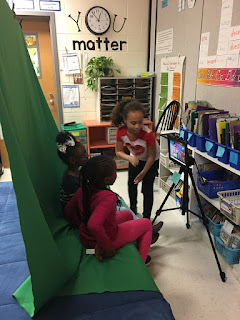 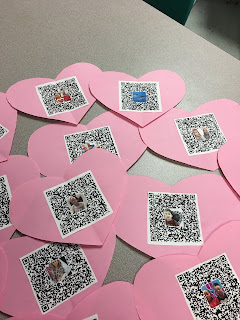 We used Padlet to make connections and send Global Valentines.

We also made Heart Idioms and shared them with our friends far away using Flipgrid. This was the first time I used Flipgrid.  It was pretty easy and the kids had a ball. I got this idea after reading a tweet from @YollisClass.  If you are not connected on Twitter, you are definitely missing out. It is the BEST PD around. Take a look at some of our Heart Idioms.

Begin with the End in Mind

Hummm...That sounds great. In theory. But what if the end seems impossible to reach or even imagine? If you would have told me a little over a year ago that I would have ridden my bike 40 miles. In the rain.  Over the Verrazanno Bridge. I would have given you the side-eye and probably said sarcastically, "Ohh-Kay".

Second, when I started riding my bike I literally could not ride 1 mile. I couldn't even ride a half of a mile. The first time I rode I fell. Twice!  I vividly remember riding my bike as a kid.  All. Day. Long. Not anymore. I will admit it, I was scared!

So, what changed?  I had a great coach; who was also a friend. She showed me how to turn so I wouldn't fall.  She rode beside me, encouraging me along the way.  I remember her saying, "Do you see that bench? Can you make it to that next bench?"  Then it was "Can you make it to the sign? There is a bench after that sign where we can stop and rest". "There are some horses around the turn. Let's make it to the horses."  I never saw any horses!


We took pictures along the way celebrating my accomplishments. In the beginning, she was very encouraging. The more I rode, the better my endurance got.  I also noticed that she became a little more demanding: "Sheila, you can do this. We are only going to rest for 3 minutes. Let's go!"


Why am I writing about riding a bike?  Because there are so many parallels between my learning to ride again and teaching.

I also needed someone who I had a relationship with, a connection, someone who knew me.  She was patient. She showed me how. She did it with me, right beside me. Kind of like guided practice.


She encouraged me. She monitored my progress and gave me specific feedback.  Not everything all at once, mind you.  Just enough to move me along. Not only did she monitor my progress, but she shared my results with me: "You're doing great! You just rode 3 miles! You are riding 9 miles per hour. (That's still my preferred speed, by the way. . . Growth Mindset!)

In the end, I was able to do it. Independently. She gave me something that can never be taken away from me.  The knowledge that I can be successful at what I work hard at.


And yes, I really rode 40 miles in New York with thousands of other bikers in the Five Boros Tour, In the rain.  When I crossed that finish line, I wanted to cry; I actually think I did?

Later that summer I rode 50 miles in Florida. I still haven't ridden a century . . . YET!